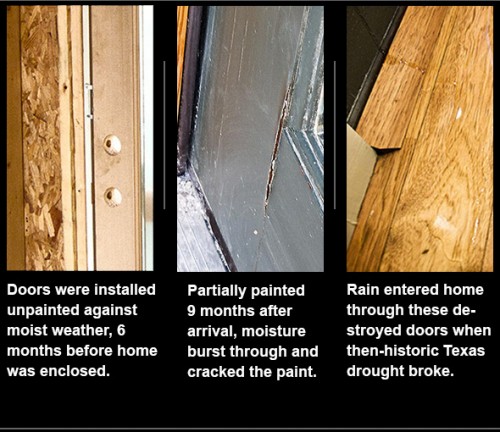 Our exterior doors began deteriorating shortly after we moved in, which we pointed out to the builders many times.

The builders did nothing from January through April, 2009, then the doors began cracking, flaking off paint and bubbling.

In April, we had 2 separate paint store managers assess the doors, as well as the many other paint problems we had throughout the house before and after we moved in.

The doors, both managers said, were improperly prepared and painted. We scheduled a meeting with Beau Rutherford, Jim Rutherford, their painter and the manager of the store where they bought their paint. Regarding the doors, the manager stood by his analysis despite the Rutherfords’ blaming bad paint.

We had an independent painter assess the doors. He said the same thing, plus, he said it appeared the doors were painted while weathered. That comment started our photo search of the doors and exif data showing a timeline of the doors’ destruction.

From installation to applying our selected paint, it took the Rutherford Custom Homes 9 months. In between, the unsealed doors absorbed moisture, and after paint was applied, it quickly began to crack, bubble, flake, and fall off.

To make a long story short:

Before signing the contract, and after Rutherford Custom Homes had the plans for months, we specifically asked Beau Rutherford and Jim Rutherford if they had any issues with anything about the home. They said they had no issues.

After signing the contract, Jim Rutherford asked us to switch to metal doors as he said wood exterior doors might not hold up against the weather. We chose to stick with the doors in the plans, which they’d already said they had no problems with.

The fact that the Rutherfords brought this up (the doors), and only the doors, we thought meant they would take extra care with the doors.

Do these doors appear refinished? 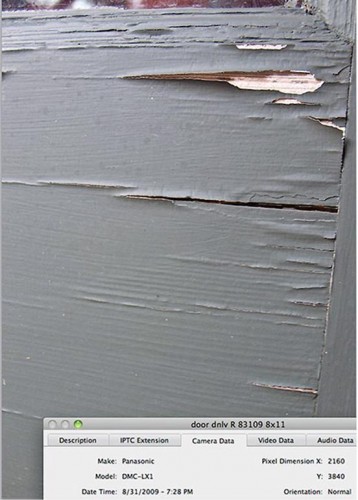 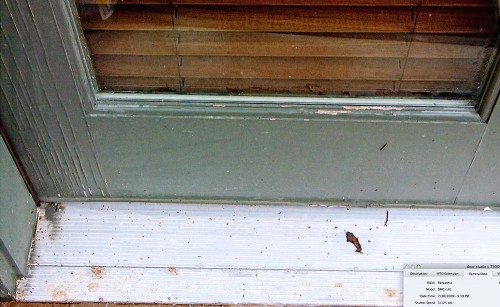 Beau Rutherford testified these doors were refinished by his visit 1 month earlier.

This also was supposed to be a door just refinished by Rutherford Custom Homes. -- Testimony, James W. Rutherford, Jr.

For months, we pressed Rutherfords to replace fast-deteriorating doors.

Rutherfords agreed to refinish the doors. Compare evidence with testimony under oath.

Beau Rutherford testified under oath that he had the doors refinished.

Doors were refinished by his last visit, Beau Rutherford testified. Photo was taken less than 2 months after that last visit.

When the drought broke, water came through the doors 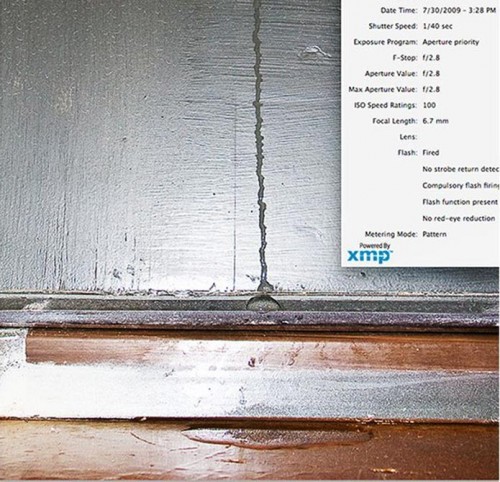 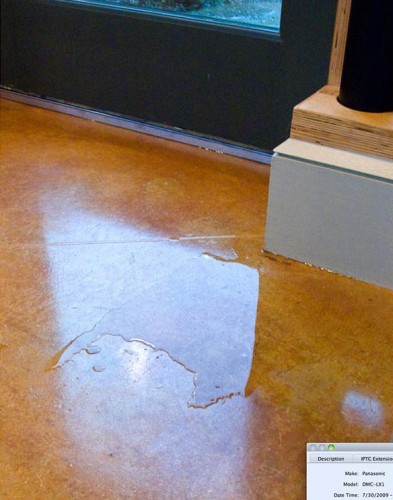 Water came through a door when the then-historic Texas drought broke.

Drought-ending rain came through and around exterior doors.

Builder Beau Rutherford testified he adjusted the strike plate. He did nothing else and the water continued to come through and around the doors.

Water came through and around the exterior doors while also coming through more than 20 windows when the then-historic drought broke in the Texas Hill Country.

Doors were installed 9 months before being painted 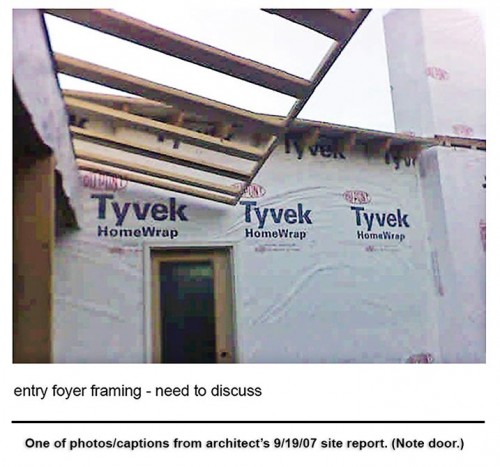 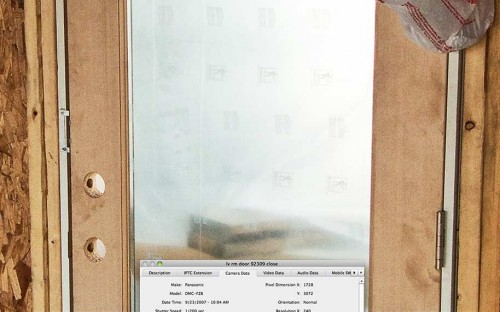 Living room door inside, 9/23/07. All exterior doors were installed this way. The final walls enclosing the home went up 6 months later.

Studio door installed about 9 months before it, others, got green paint.

Porch doors also soaked up hilltop moisture, including morning clouds engulfing the house, before getting paint.

Jim Rutherford testified they did not seal faces of the doors before putting them outside -- here, in October.

After 3 months, doors still were not sealed per Simpson doors warranty information, stamped atop the doors. December, 2007.

For 2 years, the Rutherfords never submitted to the court any documentation that they purchased a clear exterior wood sealer or had such applied to the doors.

A: I was there the day they delivered them (the doors) and saw them. I also had the painter that day to seal all the exterior edges.
Q: What does that mean, the exterior edges?
A: Top and the two sides. The bottom is always sealed at the factory.
Q. How about the face of the doors? Was it sealed, sir?
A: No, it wasn’t because we didn’t have a — we didn’t have a paint selection. 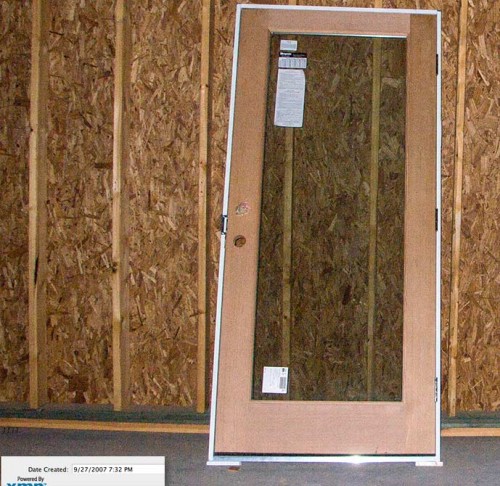 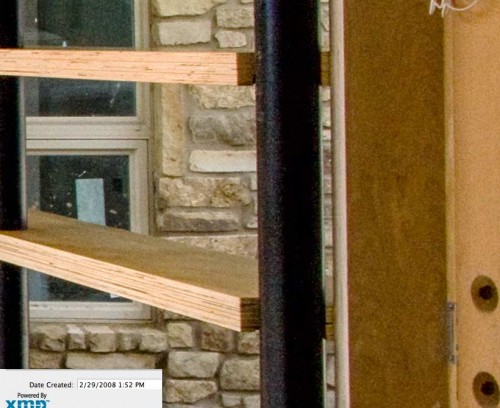 Front door was installed unpainted, 5 months after its Sept., 2007 arrival, 2 months after exterior paint was selected.

Raw front door was taking in night-time moisture in Texas Hill Country. Some mornings, a cloud covers our hilltop homesite.

Jim Rutherford testified this door was painted 3 months earlier. It wasn't painted until 3 months after this photo.

After more than a month of absorbing moisture, raw front door was sealed in plastic.

Moisture was still sealed in, coming up on a month.

Front door still sealed in plastic. At this time, the Rutherfords were having the interior painted before the exterior doors.

Exterior foyer framing was painted before the exterior doors.

2 months after release from plastic, pent-up moisture burst through seam.

After another 4 months, paint opens to bare wood.

Builder Beau Rutherford testified the doors were refinished 2 months before this photo.

When the drought broke, rain came in through and around the front door.

The front door, 4 months after installation. Not all parts of the door were painted and sealed, voiding the warranty.

The photographic evidence and James W. (Jim) Rutherford Sr.’s testimony do not agree.

For destroyed doors, here’s whom the Rutherfords blamed

Who’s fault was it the unsealed doors cracked, split and allowed rainwater to pass through closed doors?

Here’s what we heard:

And they even came up with a redesign of the house to mitigate the water intrusion caused by the destruction of the doors.

Here’s what they had their attorney ask our architect during his deposition:

Q: Do you think awnings or another covering over the doors and windows would have mitigated water intrusion?