Roofer, just down from our roof: ‘Whoever did this roof, did you wrong.’

Beau Rutherford went up and supposedly repaired the roof after the 5/2/09 roof leak. But as is clear a month later, Beau Rutherford’s roof repair failed.

The builders had their roofer try to repair the roof the second time, but it too, failed.

Beau Rutherford, himself, patched a water-created hole in the wall at the light switch by 6/27/09. (See below.)

Efforts in person and in writing to get the builders to fix the leaking roof got no action from them before we terminated Rutherford Custom Homes  in late July.

Here are builders’ comments under oath at their depositions Sept. 15, 2011. 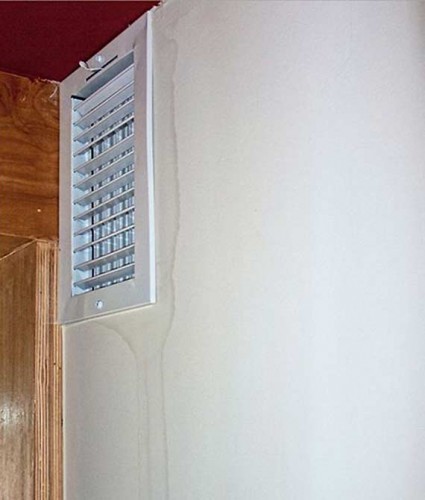 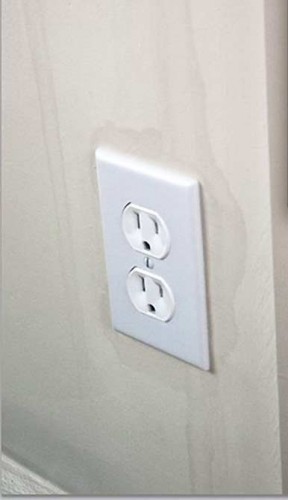 Our first rain (light one), 7 months after moving in, brought gusher.

Rain exited the wall at ac duct and 2 electrical outlets.

Water from roof was going inside wall into wood floor.

Beau Rutherford, himself, patched wall. Despite requests and To Do list, water flow through damp wall to floor (cupped) wasn't fixed.

Rutherford Custom Homes roof from above.

Rust and separation were among roof problems.

One of the builder's patching attempts on our roof.

Gutter repairman said roof was our problem. There are hundreds of staples coming out of your roof, he said.

It was pointed out to us that roof should not be directing water to our walls.

Roof rainwater flowed to wall, then to door where it flowed down into wood floor, inside.

Subcontractor said he pointed out big hole to builder, who did nothing. We sealed the opening.

Rust was found on underside of foyer roof when we had the roof replaced.

We could not find a roofer willing to repair our roof

When we were looking for a good roofer to repair our new Rutherford Custom Homes roof, we had some interesting responses.

Number 1, nobody would repair the roof. Said one: We would never put our name on that roof. Another, after inspecting it and sounding excited, said: That’s the worst roof I’ve seen in my 18 years of roofing. Another said he wouldn’t put it on a dog house.

Some of the items one roofer said contributed to our leaks were:

While we were living in the house, Jim Rutherford called and said not to be surprised to see someone on the roof. He would not say why he would be there but the builders had left a ladder and roofing materials in our garage for months after we moved in. Also, there remained a can of some kind of roofing material on the roof by the chimney. The builders had been asked to finish the roof and remove these.

We had the big stones removed from roof by mistake

Not long after the phone call, a neighbor who took walks up our hill and could see our roof from above, asked why we had large stones on our roof. I thought they must have been put there by mistake and asked the stone crew to come by and remove them.

Much later, when I mentioned the large stones to one of the roofers we were interviewing, he didn’t hesitate. He said they probably were there to hold down the loose metal roof panels.
James W. (Beau) Rutherford Jr. in his deposition:

Q: And is it also true, then, from its beginning through its end that it met your approval from the standpoint of it being suitable as a completed residence for the Roses?
A: Yes, sir.