The hickory/pecan floors were ruined by a confluence of damaging Rutherford Custom Homes building practices, not following the architect’s plan or suggestions, and not acting to save the floor.

Components contributing to the damage:

The roof — A major enabler of moisture to the floor

Large roof leaks (see roof section) at the junction of the foyer roof and dining room wall were enabling water to flow inside the wall to under the wood dining room floor. Beau and Jim Rutherford were asked to open, check and repair this foyer wall. They tried to repair the leaks twice but failed, and Rutherford Custom Homes did not respond to requests or the To Do list to check that wall, excessively damp after every rain. Later moisture meter readings by a floor specialist we called in showed moisture from that wall spread out under the dining room floor.

Meter readings also showed high moisture on the other side of the dining room, where the porch roof met the wall.

After terminating Rutherford Custom Homes, a subcontractor at the home during a rain said we had roof problems, as the foyer, TV den and porch roofs should not be directing water to the walls, but out, away from the walls. Later, a gutter repairman told us the same thing as he observed the house in the rain.

Leaking doors and leaking windows above the floor

Also affecting the floor: The deteriorating, splitting doors were passing water into the home (see Doors section.) And the builders did not weather seal the door frames and jambs (see Balcony section.) Also, we tried with numerous towels to keep water from reaching the floor from the 21 leaking windows above wood floors (see Windows section.)

Wood floor was sitting on a moist, blown-in insulation bed, like a soaked sponge

The crawl space had been an issue before moving in. The smell in the stand-up crawl space was so strong it seemed obvious that better ventilation was needed. The builders had installed one tiny vent, not two large vents as on the architectural plan. Jim Rutherford told us he’d discussed the stifling crawl space and one vent with the building inspector, but said it was impossible to add a second vent through the concrete wall. Before moving in, we added the crawl space smell to the Sept. 22, 2008 To Do list.

After moving in, it was difficult to be in the studio some days as the smell inside the house was so strong. Again, we talked with Jim Rutherford, and Rutherford Custom Homes did nothing. Jim Rutherford suggested we spray the dirt with Clorox and water.

The floor specialist we called, on his second visit, asked to check the crawl space. The joists registered red-line moisture (see photo) and when he touched the blown-in insulation, water ran down. It was like the floor was sitting on a sponge just soaked under the faucet.

2 specialists told us to fix the crawl space, and fast

The floor man told us what to do to remediate the crawl space and told us of a company that specialized in saving floors. That restoration tech’s visit and his meters confirmed the high moisture content, which had penetrated a downstairs home wall as well. He told us what we needed to do, urgently. He said his company didn’t do those things as he only dealt with savable floors. But what the 2 specialists said agreed.

Within days, we had 3 vents drilled through the concrete walls, put a barrier over the crawl space soil, tore out our Rutherford Custom Home damp drywall, cleaned everything, and had a moisture barrier wall installed, the same type of moisture barrier our architect had recommended to Jim Rutherford.

After we remediated the crawl space, got a new roof, weather-sealed the leaking windows and door jambs, replaced and/or fixed the Tyvek, rebuilt the balcony, replaced the leaking doors, and painted, we turned our attention to new hickory/pecan flooring.

James W. Rutherford, Sr. (Jim), testifying in his deposition about the 1 tiny crawl space vent they installed rather than the 2 large vents on the plans (see Plans? section, also,  photo below):

Q: Mr. Rutherford, what do you know about the ventilation in the crawl space down at the bottom of that house?
A: I know quite a bit about it. Number one, it wasn’t on the plans – anywhere on the plans, except one vent. 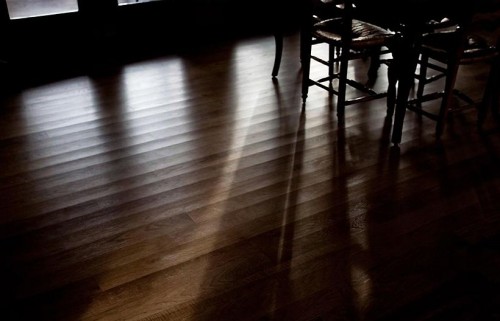 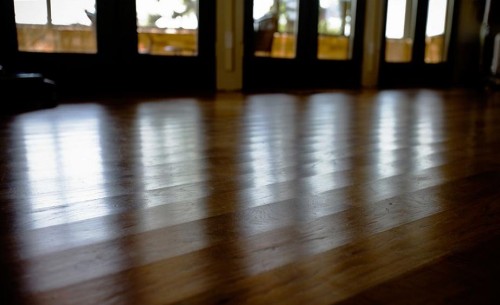 Water migrated down walls to wood floor on both sides of room from faulty roof, flashing.

Roof over porch directed rainwater to wall rather than away from home.

Moisture from sides of room and crawl space below cupped wood floor.

Of warped, cupped wood, builder only offered to sand down threshold so door could open.

Getting no help, we hired specialists. 4 x 7 floor hole was cut to block moisture spread.

To Do list didn't spur builders to stop flow to cupping floor.

On To Do lists, builder did nothing to halt soaring moisture. James (Jim) Rutherford said another vent couldn't be cut.

Water pond formed beside the crawl space foundation as builder did not grade and fill the pit.

About a 40-inch drop led water to a containment pit at the crawl space.

James W. Rutherford, Jr. (Beau), testifying in his deposition about the home they built and left to us in the state described, above:

Q: And is it also true, then, from its beginning through its end that it met your approval from the standpoint of it being suitable as a completed residence for the Roses?
A: Yes, sir.