Nearly 30 windows in our Rutherford Custom Home leaked. The leaks began with rains during construction, then homebuilding entered the then-historic Texas drought, which lasted until after we moved in.

All this, the builder ignored in installing our windows:

Our first light rain came after 4 1/2 months in the home, on April, 14, 2009. (See photos.) I grew up in a South Florida tract house and went through hurricanes without 1 window leak. But here, our Rutherford Custom Homes’ windows were leaking in light rains.

In 3 1/2 months, the builder took no action to weather-seal the leaking windows. Nor did Rutherford Custom Homes act after deep water stains twice were pointed out to Beau Rutherford on window sills, coming up through the paint. We later learned the problem was behind stone and wood.

Beau Rutherford testified that the windows passed his inspection

Q: Did you inspect the windows after their installation to satisfy yourself that they were – would be weather tight and free of leakage?
A: Yes, I did.
Q: And they passed your inspection?
A: Yes. 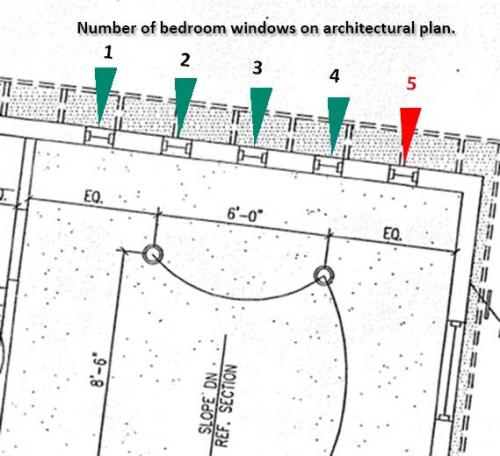 We had the wall cut open.

5th window, per architect's plan, is discovered behind drywall.

5 windows on the plan, now we have 5 windows in the wall.

Day or night, we manned towels to block water from floor throughout the house 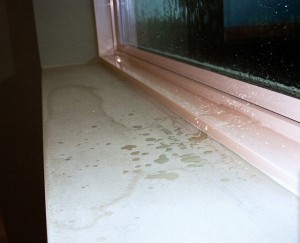 Rain on long-time water stain that builder ignored in person and in To Do list.

Windows repairman pointed out cracks beside windows as, not good

Rutherfords sent a repairman who didn't know and couldn't see behind stone how windows were installed.

Water came from walls around windows. Rutherfords again sent person who had not installed the windows after 2nd rain.

Running out of towels in TV den.

Rain splashed down from above window.

Another crack appeared in wet drywall.

A drywall crack above studio window.

One of water stains pointed out to builder Beau Rutherford.

Stain shown to builder, James W. Rutherford Jr., and put on To Do list. Nothing was done.

Beau Rutherford’s testimony regarding the two visits of his windows repairman, and our pointing out to Beau Rutherford in-person the deep water stains on window sills:

Q: Did you ever receive notice … that the windows were leaking water from outside the house?
A: Not after the repair (of a year-earlier leak during construction), no.
Q: Never got any notice at all?
A: Not that I can recall.

Warnings and explicit instructions were ignored by builder 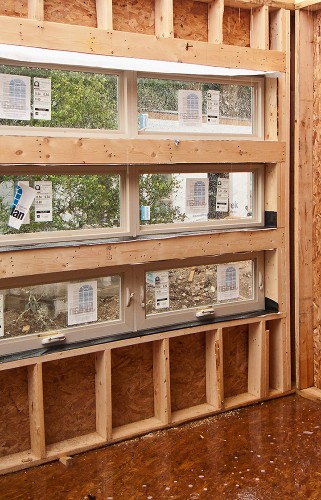 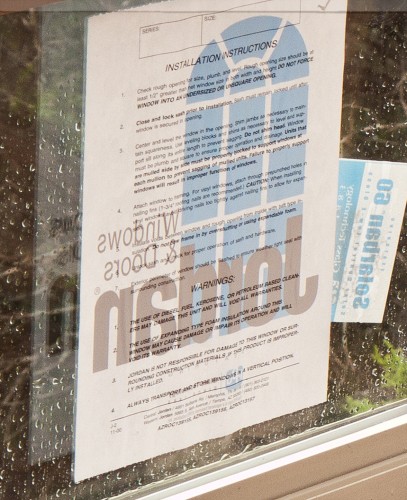 Installation instructions were pasted on every window.

Architect's photo and caption: use peel and stick.

Rutherford Custom Homes did not weather-seal windows, and worse 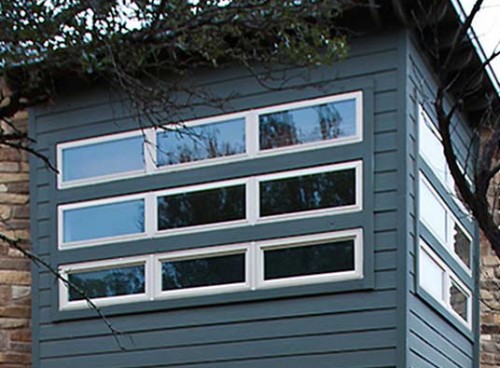 Framing miscut all around these 15 windows.

Removed framing reveals that builder did not weather seal windows.

Windows installed without sealing them, enabling water entry into home. Architect's report pointed out this problem, called for windows to be flashed.

No weather seal on windows.

Builder did not have Tyvek gaps patched.

Difference between sealed and unsealed windows is easy to see 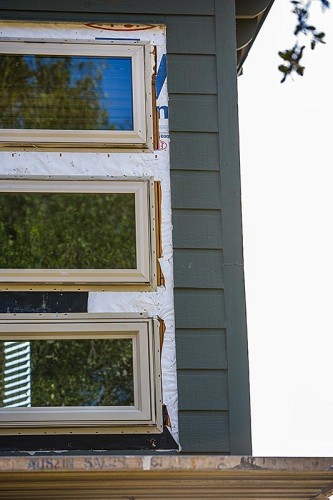 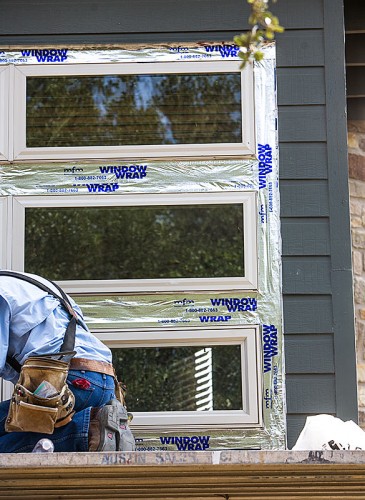 Builder left windows without seal and with OSB and Tyvek openings.

We sealed the windows. How Rutherford Custom Homes should have done it.

How could we build water-tight windows when this builder couldn’t?

Beau Rutherford, was president of this construction company. His father Jim Rutherford touted himself as having 40 years of building experience, and according to Beau Rutherford, Jim Rutherford served as RCH paid consultant. However, Rutherford Custom Homes was unable to build our home so that all windows wouldn’t leak. We found 28 leaking windows. This, despite explicit directions. Then, after the first rains, our builders were unable to stop the leaks for 3 1/2 months, when we had to terminate them.

With no construction experience, even we were able to do what the builders were unable to accomplish — weather-seal the windows.

How did we do it? We looked at window manufacturers’ installation instructions and DuPont home building online, as well as question online building expert blogs. Plus, the contractors we hired not only knew how to build, they took pride in their work.

We weather-sealed the windows with peel and stick flashing. It wasn’t rocket science and DuPont, the maker of our Tyvek Home Wrap, has a good website for proper installation of windows and how to use their flashing products, none of which were used on our windows. In fact, all windows manufacturers we looked up at that time had almost identical examples of how to flash windows, and they all used peel and stick flashing.

Since our construction, DuPont is offering another way to weather-seal windows in addition to peel and stick. We found their website helpful both for its graphics as well as product details on what constitutes weather-seal flashing: http://www2.dupont.com/Tyvek_Weatherization/en_US/products/residential/resi_flashing_systems.html

Rather than seal the leaking windows, Rutherford Custom Homes’ posed something else

Rutherfords’ attorney asked our architect in his deposition about a redesign of the home 5 years after the fact to mitigate water intrusion from their unsealed windows.

Attorney to our architect:

Q: Do you think awnings or another covering over the doors and windows would have mitigated water intrusion?